It’s October, and the future is now.

The daylight is noticeably shorter. The sun is a bit lower in the afternoon sky. Yes, it’s October. Football season proper. September is too hot. November is too depressing. But, October. Aye, this month was made for college football. And October 2009 is a real test for this rebuilding Vol football program. Auburn, Georgia, bye week, Alabama, South Carolina. This is SEC football. I love it. And, I dread it.

We’re 2-2. After this upcoming stretch of games, it is conceivable that we could be 2-6. But, the Auburn and Georgia games are winnable, frankly. We’re at home, and Auburn, like us, is rebuilding. Georgia is underwhelming. Alabama smells like invincibility is in the works. South Carolina is too far off to predict.

We all knew about this stretch of the schedule. We knew that this would either make us into a bowl team or break us into a losing team for consecutive seasons.

If we can achieve 2-2 during this upcoming stretch, then we have a better than 50-50 shot at a winning season, which I think would be a major achievement for this new coaching staff. But without a win Saturday, that may be too much to ask.

I’ll be watching the Auburn game, to be played under an almost full moon under the lights within the magnificent orange hue of Neyland Stadium on an early Autumn evening, with half an ounce of excitement and half an ounce of trepidation.

Like I said, this is SEC football. I love it. And, I dread it.

I wasn’t a history major, but I love SEC football history. 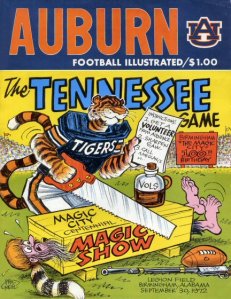 Auburn used to be the Vols' traditional SEC opener with away games being played at Birmingham's Legion Field.

Auburn is one of Tennessee’s great rivals. The younger fans (those that only know SEC football since the division of the conference into East and West beginning in 1992 which impacted schedules and rivalries) may not see it this way, but if you remember Auburn as Tennessee’s traditional SEC opener as I do, then you see the Tigers as a major rival. And if you do, you remember playing away games against Auburn not down on the plains but in Birmingham at Legion Field.

Another reason that Auburn is/should be viewed as one of our great rivals is that they are one of only two SEC schools (the other being Auburn’s biggest rival, Alabama) with an all-time winning record against the Vols. Auburn leads the series 21-26-3 that began in 1900. That’s enough for me, Brother.

And, once Georgia Tech left the SEC way back in the 60’s, it was Auburn vs. Tennessee as the best engineering school of the conference’s universities.

Anyway, Auburn and Tennessee used to play every year. That happened from 1956 to 1991. Since, the schools have only faced each other 6 times in league play and once in the SEC championship game (2004).

As I mentioned, all away Auburn games were played at Birmingham until 1974 when the Vols travelled to the prettiest town on the plain for the very first time, and lost 21-0.

But my favorite moment in Vol-Auburn history was 27 September 1980. Another game played in Auburn, Alabama. The Vols were a big underdog. Tennessee had been dubbed “The Best 0-2 Team in the Nation” after dropping their first two games: to Georgia 16-15 in the famous debut of freshman Hershel Walker; and to Southern Cal 20-17. After finally getting a win against Washington State 35-23, they played their first away game of the season at Auburn.

But the Auburn fans didn’t give us any respect – I remember hearing stories of our players being pelted with oranges thrown from the Tiger faithful before the game. Included was Vol great Reggie White who received an orange that stuck in his face mask. 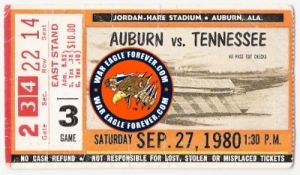 A glorious afternoon on the Plains: Tenn 42 Auburn 0.

I was living in Norman, Oklahoma at the time and on that Auburn-game-day I went to see OU play Stanford University and their well-publicized QB, John Elway. It was a wet, slippery afternoon, but that didn’t affect the Stanford offense as they carved up the Oklahoma defense with a 31-14 upset win. One of the best performances I can remember seeing live. Going back to my car after the game, I remember dreading the scoreboard show on the OU network’s post-game show (kids, that’s back in the day when you were totally at the mercy of the media to give you what you wanted – before today’s instant gratification of the internet). Knowing we were 1-2, I knew 1-3 was likely.

Then the announcer read the score: “Tennessee 42 Auburn 0”.

I couldn’t believe my ears. I started yelling inside my little Mazda 626 as if someone in Norman, Oklahoma would really care.

Nobody cared but me. I was wishing I was back in Knoxville – one of many reasons at that time. But the joy didn’t last long, for that season, after winning the next game against Georgia Tech to go 3-2, we ripped off several losses in a row before winning our last two against Kentucky and Vandy to “salvage” a 5-6 season.

But that afternoon in Norman when I heard that score from Auburn was a moment of Volunteer joy I still remember.

Auburn have a new coach, too.

Lane Kiffin has a brother of sorts. Gene Chizik is also in his first year as an SEC head coach. The 47-year old former Florida Gator (played LB in 1981) was not exactly the most popular choice for Tommy Tubberville’s replacement, but now that his troops are 4-0, those sentiments are starting to fade a little bit. 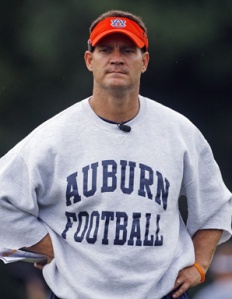 Mr. Chizik is a native of Tarpon Springs, FL. He began his coaching career as head coach of Seminole High School (1986-88) and then became a graduate assistant at Clemson (1988-89) where he earned his Masters Degree. He then began his long road to Auburn. He toiled in the ranks of assistant coach and coordinator at Middle Tennessee State (1990-91), Stephen F. Austin (1992-97), Central Florida (1998-01), Auburn (2002-04), and Texas (2005-06). While at Central Florida (and here is the it’s-a-small-world part), he used to visit the practices of the Tampa Bay Bucs where he learned from the magnificent staff of Tony Dungy/Monte Kiffin/Lovie Smith.

And what happened after that makes you believe those visits were worth the time. Chizik led Auburn’s defense in 2004 to a 13-0 season and won the 2004 Broyles Award as the nation’s top assistant coach in college football. And after that, he led the Texas Longhorn defense to a national championship in the Rose Bowl with a victory over USC (and Lane Kiffin).

Well, he has the Plainsmen believing in themselves once again. They certainly are playing better than what they showed in their listless win over Tennessee last year in Auburn. But, so are we. However that isn’t much of an accomplishment. I can’t think of a worse game (and it was close) than that snoozer from last season. Absolutely dreadful stuff.

Bits and bytes for your pre-game meal.

Auburn’s placekicker, Wes Byron, is a perfect 6 for 6 in field goals.

The Tigers’ special teams are dreadful otherwise. They are 102nd in the nation in net punting. They consistently give up 30 to 40 yards on kickoffs, and 15 to 25 yards on punts.

Auburn is ranked 3rd in the nation in total offense, 5th in rushing, 3rd in scoring, and is in the top 10 in red-zone scoring.

The Tigers have allowed only 2 sacks all season.

Auburn has 2 of the 3 top rushers in the SEC: Ben Tate and Onterio McCalebb. Tennessee has the SEC’s top rusher in Montario hardesty.

Auburn has 2 of the top 3 receivers in the SEC: Darvin Adams and Terrell Zachery. Tennessee’s top receiver, Quintin hancock, is 23rd in the conference.

Other Auburn players to watch are sophomore Neiko Thorpe (DB) and Zac Etheridge, a leading tackler.

Tiger QB Chris Todd has gone from the doghouse of last year to the penthouse so far this year. I haven’t mentioned Jonathan Crompton in this blog post until now.

I don’t like what is happening to our boy. 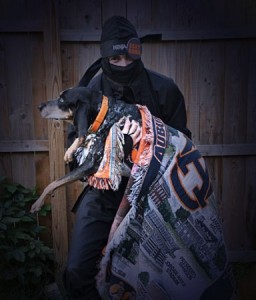 Reports have surfaced that our boy, Smokey, is being brainwashed by Special Forces of the War Eagle military. The reports are nothing short of disturbing. The smokemaster was apparently abducted and then mentally reprogrammed. Physical abuse of a dog is one thing, but mental abuse is morally offensive.

Reports of this operation can be read at the War Eagle Reader, one of the fine Auburn blogs. In particular, read the posts titled: Hey Vols, We Have Yr Smokey, Part I: Houndnapping!; and Part II: The Re-education of Smokey.

And I thought Michael Vick was bad!

The Vols are a slight favorite. I’d rather be an underdog, because that’s what I feel like.

The Vols are “doing it” with their defense, and Auburn is “getting it done” with their offense. [I read sh*t like this all the time and it makes me laugh out loud.] I expect a close game, not a high scoring affair no matter the gaudy stats that the Tigers are bringing into our fair town. This is a game that things like turnovers, especially scores as a direct result, will decide.

My game predictions, as awful as they almost always are, never factor in the likelihood of KO’s / punts / intercepted passes returned for a TD. Therefore, keep that in mind when viewing the score, which I hope to godalmitey is dead wrong.

But if E.B. or Oku or somebody else do the honors with an unexpected return of something unintended, then my prognostication may just be dead wrong. 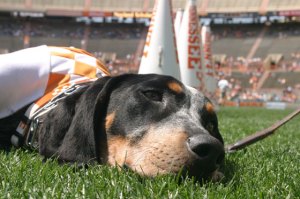